I hold my hands up. I'm guilty of wasting food on a very regular basis - broccoli stalks left to turn rubbery, sprouting potatoes and bags of fermenting mozzarella - all in the bin. It's something I always vow to remedy but never quite manage to achieve it. In this blog post the queen of leftover lunches, Laura Beardwood, shares one of her improvised recipes from what she has hanging around her kitchen.

Laura is one of my oldest Instagram friends and her feed is full of pictures of her beautiful boy and her delicious dinners - she can turn odds and ends and leftover scraps of food into delicious meals and they always look so good too. I hope she gives you some inspiration!

"There are so many days when I open the fridge and just stand there staring in at all the unsatisfactory little scraps and tired vegetables,and try to be excited about whatever it is that is just about to go out of date (usually the date that I have mentally allotted to it, rather than the one that's been given to it previously). We've all been there. But then there's the bit of me that hates wasting anything and that loves the challenge of finding something great amongst the crap….

A salad is usually my answer. I love to mix warm and cold and to end up with a meal in a bowl that is way more than the sum of its parts.

This was today's answer to the 'eurgh, what am I going to do for lunch?' question, the combo of what I had in the fridge/freezer/cupboard… 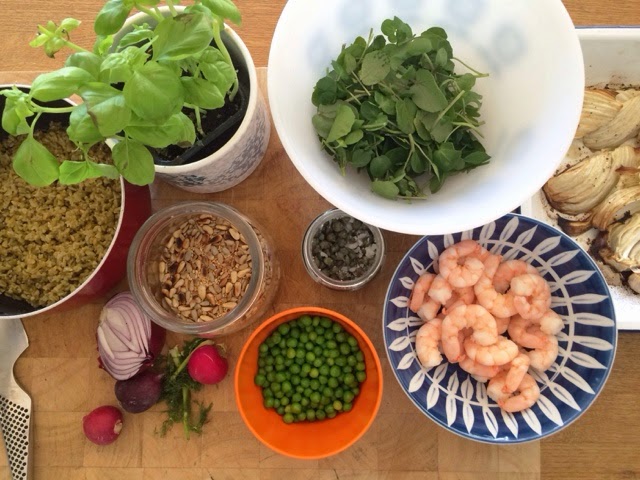 quarter of a pack of freekeh*

a medium bulb of fennel

a few cloves of garlic

half a red onion

radishes (three, rolling around at the bottom of the drawer)

2. Slice the fennel into quarters and put into an ovenproof dish  (save the frondy bits at the top for adding to the salad at the end.

3. Squash the garlic cloves with the flat of a knife and put in with the fennel. Add some olive oil, salt and pepper and roast until the fennel has browned softened just looks done (about 25 mins).

4. Whilst the fennel roasts, cook the freekeh according to the instructions on the pack. Put a handful of frozen peas into a small bowl and pour over some boiling water and leave to defrost.

5. Put the watercress in a large bowl, chop the red onion and add to the bowl, followed by the radishes, prawns and a few capers.

6. Once the fennel is cooked, cut up into chunks and add to the salad. If you want you can squeeze the roasted garlic from the skins and throw that in too.

7. Add the freekeh, drain the peas and mix everything together. Squeeze over the juice of one lemon and glug over some olive oil. Chop a handful of basil and chuck on the top along with the fennel tops and the toasted seeds/nuts.

8. Check for seasoning. Put a dollop of greek yoghurt in a small bowl, add some olive oil, salt and pepper for people to add to the salad at the table, and a jar of chilli oil never goes amiss either. 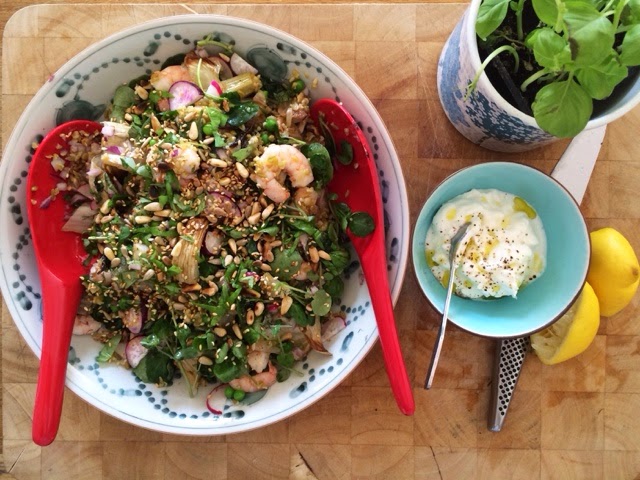 This is a 'recipe' only in that it's a list of things that I happened to put together today. It's not at all prescriptive. The point is that anything goes. What have you got in the fridge or in the cupboard that you could use… there are plenty of grains that are great in place of the freekeh, try quinoa or bulgar wheat, puy lentils, or red or brown rice are good and nutty.* 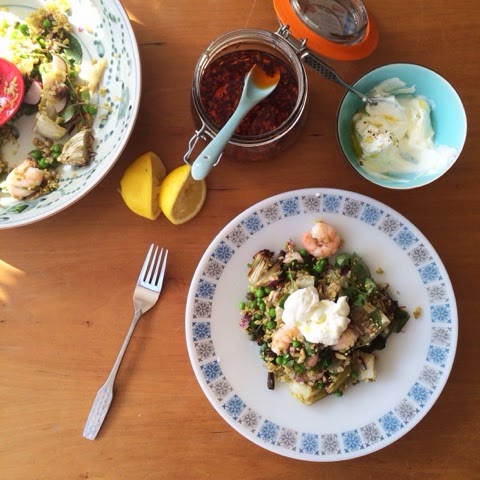 So many vegetables are delicious in salads once they have been roasted to intensify their flavours as well as covering up the fact that they might not be at their most perky - peppers, squash, sweet potatoes, courgettes, onions. Try oven drying tomatoes at a really low heat for an hour.

Use any kind of green leaf, rocket, spinach, add spring onion, olives and whatever fresh herbs you might have.

Do you have a tin of anchovies or sardines in the cupboard, or some tuna? Some smoked mackerel in the fridge that you keep meaning to eat more of because it's so good for you? Some feta or halloumi? Bake salmon fillets and flake them in. Add fresh or dried chilli. Go for a more lime/soy/sesame oil based dressing with lots of fresh coriander for a more asian flavour.

If you work on the basis of some kind of grain + some form of protein + veg + something green + herb/spice/nut/dressing you can't go wrong. Look a bit deeper into your dwindling supplies and see what gives. I can pretty much promise you won't be disappointed."

"Have nothing in your house that you do not know to be useful, or believe to be beautiful"